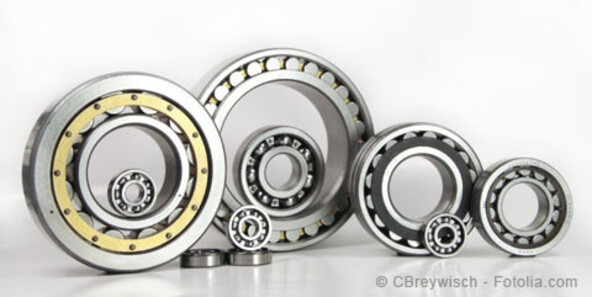 Functional principle and types of a rolling bearing

Tasks of the rolling bearing lubricant

When selected correctly, greases ensure reliable lubrication for a wide range of speeds and loads for all types of bearings with the exception of axial spherical roller bearings.

Structure and characterization of greases

Lubricating greases consist of a base oil that is bound by a thickener. This ensures that the oil remains at the lubricating point. There it ensures effective protection against friction and wear and seals the lubricating point against external influences such as moisture and foreign matter. Greases are therefore ideal for use in rolling bearings. The typical performance characteristics of a grease, such as the drop point, load capacity and resistance to water, are determined by the base oil and the thickener. Improvement of the corrosion and wear protection, load-bearing and adhesive capacity and the resistance to ageing is realized through the additives added to the grease.

At lubricating greases the consistency is the characteristic for assessing the strength of a grease. The classification of greases according to NLGI ranges from very soft (Class 000) to very firm (Class 6). Lubricant greases of the NLGI grades 1-4 are suitable for use in rolling bearings.

The four-ball test rig is a testing device for lubricants used at high surface pressures. It consists of a rotating moving ball which slides on three fixed balls. During the test for the maximum load-bearing capacity of the lubricant, a test force acts on the moving ball, which is increased in steps until the four-ball system is welded together as a result of the friction heat produced.

The DN factor specifies up to which maximum rotating speeds a lubricant can be used in rolling bearings. It is calculated from the bearing rotational speed, the mean bearing diameter (in mm) and a factor considering the sliding friction component of the bearing design.

The SKF-Emcor process is used to assess the corrosion protection properties of rolling bearing greases. In the process water is added to the grease and examined for corrosion self-aligning ball bearings with defined running duration, speed and specified standstill periods to DIN 51 802802. If there is no corrosion at the visible inspection of the test rings, the degree of corrosion is 0. At very strong corrosion the degree of corrosion amounts to 5.

An important prerequisite for high operational reliability of a rolling bearing is the continuous supply with lubricant. The instructions of the bearing manufacturer have to be observed during initial greasing or renewed greasing of the bearings. It has to be filled such that all functional surfaces are certain of being greased. Bearings running slowly (DN value < 50,000) and their housing can be filled completely, high-speed bearings (DN value > 400,000) up to 1/4 of the free space inside the bearing. Otherwise we recommend filling up to 1/3.

Before switching to a different grease sort, clean the rolling bearing thoroughly or respectively relubricate with grease until the old grease has been pressed completely out of the bearing.. In this case the miscibility of the lubricants and the material compatibility has to be tested beforehand.